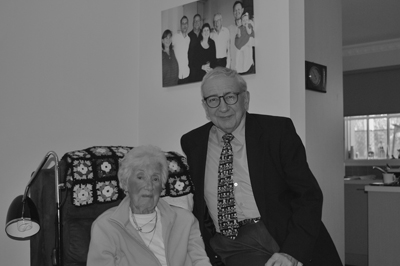 Marjorie Sculley will be 100 years young on the 12th of July. Marjorie’s son, Rob Richardson – presenter and producer of ‘The Sound of the West’ on WYNFM 88.9, has organised an afternoon tea for Marjorie and friends, on her 100th birthday. Her family will celebrate on the 16th, where Marjorie, who still enjoys a beer, will probably raise a glass (or two) for her milestone birthday.

Marjorie’s parents moved to Altona when she was three. Her dad, Noel Phair, a builder, brought his family here looking for work. He helped build Altona Primary School, which last year also celebrated its centenary. While Marjorie may not be Altona’s oldest resident, she has lived in Altona longer than any other living person, and clearly remembers the Altona trees being half her own height.

Her memories also include riding in a horse and cart, along unmade roads through the paddocks of Footscray, to buy bulk groceries from Henry Berry’s warehouse in town. Marjorie, in her early teens and the eldest of three, would then help divide the butter into one pound lots using a wire, and scoop sugar and flour into bags. In those days many things were delivered – wood, ice, and groceries. Her grandparents had come to live with the family when she was six, after the death of her father and as a result, the cake shop her mother owned, expanded to include general groceries.

Marjorie began work at 15 in North Melbourne – getting there involved a train trip, and a long, hilly walk; sometimes on pay day, she would lash out and spend a penny to catch a cab to the station. Another treat would be to join her sister in town for a malted milk – no such thing as meeting for a coffee in those days.

At 24, Marjorie married. She and her husband built their own home close to the beach she loved so much, and welcomed a son, Robert, to their family. In 1958, Marjorie was a founding member, and treasurer, of the Altona Bowls Club. The clubrooms then were basic- an airforce shed. Sadly it was a bowls trip to Parkes, where her husband suffered a stroke and died.

Marjorie loved attending church, and it was at church she met her second husband. Marjorie, in her seventies, honeymooned in the Yukon wilderness – her memories of the beautiful Banff remain with her.

When asked her secret of longevity she said she wasn’t sure, but said, “I have no complaints – I have a good life and a good son”.