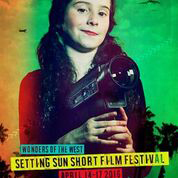 Those of you familiar with me now, are fully aware of my love for the Sun Theatre. The Yarraville Cinema is my favourite place to watch a flick and I think that us Westies are incredibly lucky, to be able to frequent such a fabulous establishment. A particularly wonderful thing about the Sun Theatre, is its constant willingness to support local causes and local talent. The local talent was on full display at this year’s 3rd Annual Setting Sun Short Film festival, held over four days from Thursday the 14th of April, to Sunday the 18th.

With 60 entries for this year’s event, the festival was filled with a diverse array of shorts –everything from sci-fi to a period drama and quality documentaries to animation.  I was lucky enough to attend the student night, and the feeling in the cinema was one of pride. Entrants and their families and friends were clearly in attendance and the opportunity to see their work up on the big screen – the very same screen that I had watched Star Wars on not long ago – was not to be missed!

As to the content, well it was actually quite brilliant! I had no idea what to expect, but left the screening with an enthusiasm for film making that can only come from knowing that anything is possible. In this age of multi-media, where my 6-year-old can make a movie on her iPad mini should the mood strike her, it is well within the realms of possibility to dream big!

I was moved to laughter, tears and genuine anticipation, as each short ended and another began. The cleverness and imagination on display was exciting and the more thrilling aspect of this particular event, was knowing that more often than not, the talent on show was coming right out of our very own backyards.

I look forward to next year’s event and will definitely be attending more of the available sessions. Get behind our local talent, because you never know when you will witness the beginnings of something special…. perhaps the next Steven Spielberg was in that cinema….time will tell. Melissa Longo